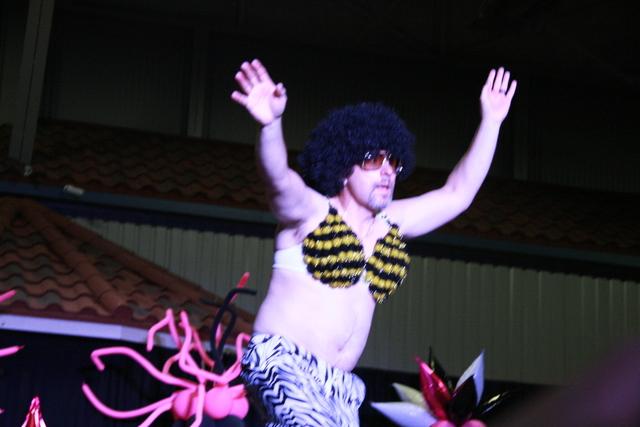 Lynette George / Herald Democrat This proud, bra-clad model gets the crowd to its feet at Bras for a Cause Saturday evening.

By Lynette George Herald Democrat The walls of the Rafter D airplane hanger at North Texas Regional Airport — Perrin Field shook Saturday night as the crowd inside roared with laughter, clapped and whistled. Their exuberance had nothing to do with airplanes and, in fact, none were around. Instead, they cheered male models strutting their stuffed [SIC] in decked out bras, all in support of Women Rock and its fight against breast cancer. The annual Bras for a Cause event, which netted about $150,000 last year, drew around 800 supporters. The proceeds are used to help local and area women and men with mammograms, treatments and many other breast cancer-related needs. Packing the pink-bedecked hangar were cancer survivors, those still fighting cancer, family members, friends and supporters. Welcoming the lively crowd was Janice Fletcher, who introduced the dozens of cancer survivors attending and made a surprise, monetary gift to three women fighting the disease. Emcee and auctioneer Corgie Fisher then took over the mic and brought on the evening’s unique entertainment — men modeling bras. The bras were then auctioned off, as were trips and other desired items. A surprise monetary donation was also made to Women Rock by students from the Grayson Culinary Arts program. Wendi Russell’s job as a volunteer was to help attendees find their tables, using not one but two handy maps of the table layout on her cell phone. She said it was a labor of love. “This is my second year to be involved with Women Rock,” Russell said. “My sister, Michelle Honeycutt, was diagnosed with cancer last year. She is a survivor. My entire family started volunteering and getting involved as much as possible.” Coworkers and friends Randi Arns of Bells and Ansley Moravec of Pottsboro took a few quiet moments outside the noisy hangar as a tearful Moravec, a cancer survivor, smiled as Arns insisted they take a selfie. “Women Rock saved my life,” Moravec said. “I would not be here talking to you if it wasn’t for this organization. I’m starting my life anew thanks to Women Rock.” The two women work at Parks Drug in Denison — something that, like cancer, Moravec had never planned on. “Working at Parks Drug has allowed me to share my story with a lot of cancer patients that come in,” Moravec said. “There are new cancer patients and they don’t know where to turn or where to go and I’m able to share about Women Rock. It’s a wonderful opportunity. This tells me that God puts you where he needs you to be. I spent 20 years in the boutique business only to find myself behind the counter of a pharmacy, but there’s a reason.” Arns said supporting Moravec is what friendship is about. “I’ve had several friends with cancer and who fought the fight and they are so very precious to me,” Arns said. “Ansley needs all the support and love we can give.” If support and friendship are keys to getting through cancer, Cherie Fry of Sherman found that out almost two years ago when she was diagnosed with breast cancer. Saturday night, she attended the fundraiser with one of her treasured friends, Linda Whitaker of Flower Mound. Fry now takes what she’s learned from her own battle with cancer and shares it through her work with home hospice and anyone needing information. “My friends were extraordinary,” Fry said. “I couldn’t have made it without them, especially Linda. She was there to take me to the doctor to get the diagnosis, find out the treatment plan, take me to surgery, bring me home, tuck me into bed, bring me my medicine and feed me. She even stayed overnight to make sure I was okay.” Whitaker said Fry’s battle hit close to home. “My sister died of cancer when I was five, but I was too young to understand,” Whitaker said. “So this was my first experience at taking care of someone (with cancer) … That’s what friends do.” Original Article and Images Courtesy of Herald Democrat: http://www.heralddemocrat.com/news/20161029/bras-for-cause-help-fight-cancer
Share